In the last few weeks, a lot of buzz has been surrounding Netflix. It's exposé 'The Social Dilemma' dives deep into media platforms such as Facebook, Twitter, and Google to uncover how advertisers leverage users' personal data in order to drive addictive behavior, and manipulate users' decisions, purchases, and even beliefs and opinions.

It means that in a quite literal sense, these platforms use selling data (users) in exchange for ad placements as their business model - leading them to become some of the most profitable companies in the history of the world. The documentary is one part detailing what we (as business leaders in consumer industries) perhaps already knew, and one part a call for change to both platform developers and policy makers who have been slow to respond to increasing criticism.

Some consumers watching the doc, however, might find themselves shocked at the revelations. Others are at the other end of the spectrum - having unsubscribed from, or maybe never signed up for, social media, for exactly these reasons. Most likely many are somewhere in between - perhaps not altogether surprised, but unsure of what there is to do about it. They have accepted manipulation as a price they are willing to pay to use these platforms.

But things are likely changing. A global campaign has gained traction since one of Netflix's last exposés on consumer data, 'The Great Hack,' which pulled back the curtain on how political strategists use individual personal data and microtargeting on Facebook to sway voters (and, some would argue, undermine democracy).

'The Social Dilemma' doubles down on the implications of how individual personal data is used, and the lengths at which the powers that be leverage that data for monetary gains. None of the experts interviewed for the doc are optimistic that as consumers understand more about how their personal information is used against them, they will become savvier, and the old methods will be less effective. Some are even a bit fatalist. Most say there needs to be drastic intervention by legislation to create rules for an industry which will never self-regulate.

And for consumer-facing companies who teeter between being somewhat blameless and being decidedly opportunistic, we say this shouldn't be a motivation to find the new, trickier way to pull the wool over consumers' eyes - it's a chance to do better.

So as we point the fingers to who is responsible for fixing these issues, we should perhaps instead look first to another root of the problem: how do we remove the blurred lines and truly define ethical advertising - and what does the future hold for it?

1. Consumers need to hold the power

Whether platform executives, legislators, or consumer industries themselves will be the ones to lead the change, we see a first priority being that consumers need to be given back power over 1) the marketing and advertising messages they are exposed to 2) which data is actually shared with platforms and affiliate companies and 3) how their data is being used by those who hold it.

While some markets have made it easier for consumers to understand and control their data à la GDPR in Europe, these policies pertain more to email and don't fully account for the Wild West that is social media and advertising platforms.

Particularly when it comes to mobile apps and their integrations to social media, there are often convoluted or oversimplified terms and agreements that do not provide consumers with enough clear information to make educated decisions regarding their personal data.

While some companies thrive in the ambiguity, we predict that businesses who care about the integrity of their customers' personal information, and who commit to a higher ethical standard, will come out on top - especially if regulation finally catches up and many companies will scramble to be compliant with the new requirements (as they did with GDPR).

One of the best ways to do this is to ensure consumers are more readily able to control their marketing and advertising messages, and can reduce the amount of private information they are required to provide to use websites and platforms.

Ethical advertising of the future will give consumers more options to turn marketing messages on and off, and allow them to control who they receive content from, and when. In fact, we foresee the rise of designated ad platforms to deliver better targeted and personalised marketing and advertising - which in the end is better for consumers and for businesses.

While it's inevitable that businesses will lose some of their audience base (maybe even a large part) with this approach, the consumers who continue to choose to engage with merchants and advertising are likely more primed to buy, and will potentially have a higher customer lifetime value. The result may be that ROI for marketing and ad campaigns will improve. When consumers gain control, businesses may actually have the opportunity to better optimise ad spend because they are only targeting those who do want to hear from advertisers - it's a win-win.

A major issue pointed out in 'The Social Dilemma' is that it's not bad enough that we know personal details about individual customers - it's that we can literally possess millions of data points for each and every individual.

We can know who a user is friends with, what they like, where they go, and what they do, every minute of every day. Not only is this questionable from an ethical standpoint - but in my opinion it's not even altogether necessary or relevant when trying to motivate behaviour.

For consumer-facing businesses, this means better behavioural data. In the future of ethical advertising, I believe when engaging customers in the activities that motivate spend, we will rely mostly (ideally, entirely) on historical activity data, and customising marketing messages and offers specifically to previous buying behaviour and patterns in purchases (whether time, location, or product/service based).

In B2C industries obtaining and using behaviour data - is it even necessary to know exactly who the consumer is, as long as we know what they buy and when?

We believe the future of leveraging data for ethical advertising will move towards anonymity. And we aren't alone. Just recently, IBM and Nielsen announced they were testing a new advertising platform that does not rely on cookies.

According to their press release:

"As we prepare for a future without third-party identifiers, it's critical that the industry put consumers at the center and rely on advanced technologies like artificial intelligence to help make sense of massive amounts of structured and unstructured data with a privacy-first mandate."

The coming shift is inevitable, but without a good solution in place, many companies will likely struggle to adapt. If businesses can right now explore potential options to collect and leverage behavioural data based on personal anonymity, rather than the typical personal identifiers, they stand to win the future of ethical advertising.

If we look to how we can achieve the above points, what needs to happen most urgently is an increase in transparency by both companies and ad platforms. As previously mentioned, we've seen a step in the right direction when it comes to cookies permissions, and some governments deploying concerted efforts to require companies to provide consumers with more information about their data and how it is being used. But at this point, it is simply not enough.

If we are to really achieve ethical advertising through a consumer base that is more in control and a less-but-better data approach, transparency is crucial. We need designated third-party advertising platforms that allow for more consumer control of the messages and information being received, to separate private data from behavioural data, and clearer communication regarding the purposes and uses of said data.

It can seem restricting, because change is hard and it feels like an opposite approach to the way things have always been done. But the result of creating a foundation of transparency in consumer-facing industries is better personalisation, improved engagement with our most important audiences, and truly ethical advertising. 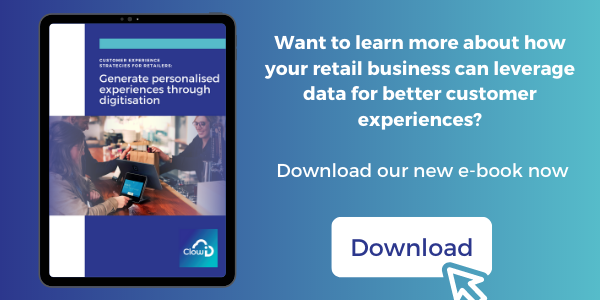 How well do you know your retail customers?

While we're living through the "age of information" and have access to more data points than ever before, retail has a data problem. With current POS systems and...

As with most things, change can be difficult for consumer-facing industries. Creating new expectations, or requesting customers to change their behaviour can be scary...